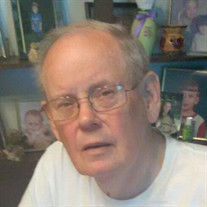 William (Bill) Edwin Taylor, age 71, of Jackson, went home to be with his Lord on Tuesday, September 25, 2018 after a lengthy battle with cancer. He was born June 11, 1947 in Gallipolis, Ohio to the late Geneva (Kitchen) and Ralph E. Taylor. Also, preceding him in death was his wife, Deborah (Hughes) Taylor, also by his daughter, Beth Ann Taylor Phillips. Surviving is a granddaughter, Harleigh Reynolds; also survived by his caring companion and loving fiance, Connie Holsinger; his stepchildren, Joseph Holsinger Jr. of Jackson and Marsha Jo Holsinger (Marcee) of Racine, Ohio; his “adopted” sister, Carol Fisher Porter of McArthur, a true life-long friend. Also surviving, his step-son, William (Tina) McCurry of Melbourne, Florida; his step-grandchildren, Lisa Mae McCurry of Florida; James “JD” McCurry of Columbus, Ohio; and daughter-in-law Nina McCurry of London, Ohio. Bill was an active man who had so much ambition for life and lived it to it's fullest. He loved the outdoors and taking vacations to Tennessee, he and Connie often spoke of the beauty of the places and things that they enjoyed together during those four short years. He cherished his little dog, Winston, who was always by his side. And his Jasper that Bill had for many years, sadly until 2015. He was a member of Emmanuel Baptist Church in Jackson. He had a great love for God and the written word. Bill was a very active member in the Jackson Jaycees and The Apple Festival until this year. But he wanted to be. After graduating from Oak Hill High School he had a few companies of employment and occupations in his life but Tiger Poly and International Paper were his most fond. He was a realty manager to factory work. He could do anything he set his mind to. He was a wonderful man, a loving husband, fiance, father of four, father-in-law and Grandpa to three. And a dear friend of many. A funeral service will be held at the Mayhew-Brown Funeral Home on Thursday, September 27, 2018 at 1:00 p.m. with Pastor Dobie Wyant officiating. Burial to follow at Fairmount Cemetery. Friends will be received at the funeral home from 11:00 a.m.-1:00 p.m. prior to the service. Arrangements are under the direction of the Mayhew-Brown Funeral Home in Jackson. Condolences may be sent to: www.mayhew-brownfuneralhome.com.

William (Bill) Edwin Taylor, age 71, of Jackson, went home to be with his Lord on Tuesday, September 25, 2018 after a lengthy battle with cancer. He was born June 11, 1947 in Gallipolis, Ohio to the late Geneva (Kitchen) and Ralph E. Taylor.... View Obituary & Service Information

The family of William E. Taylor created this Life Tributes page to make it easy to share your memories.

Send flowers to the Taylor family.