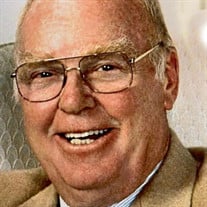 Lifelong Jackson resident and well known businessman Stewart Riegel (92) died January 3, 2021. Stewart was born December14,1928 in Jackson to Ruth (Deemer) Riegel and Robert Riegel. Stewart is survived by his wife of 44 years, Patricia (Evans) Riegel, daughter Brenda (Joel) Goodnough, son Mark (Mary) Riegel and stepchildren Judy Herbert, Rita (Dave) Wiseman, and Shelly Howard. He was the proud grandfather of 11 grandchildren,Tara (Seth) Riley, Tyson Riegel, Lena (Douglas) Zimmerer, Dustin (Stacy) Herbert, Chelsea Herbert, Natalie Burton, Brian Burton, Sara (Noah) Needler, Evan Wiseman, Kristin and Tyler Howard. He is survived by 4 great grandchildren; Kathryn and Henry Needler and Lawson and Gracelyn Herbert. He is also survived by his sister Mabel Poetker, daughter-in-law Connie Howard and many nieces and nephews. He was preceded in death by his parents Ruth and Robert Riegel, a brother Paul, stepson Steven Howard and a son-in-law Greg Herbert. Stewart was a proud veteran of the U.S. Air Force, serving from 1949-1952. He attained the rank of Technical Sgt. during the Korean Conflict. After his Air Force service he returned to Jackson to join his father and brother in the family business which became known as Jackson Implement. Stewart could be found at his desk serving the needs of his many customers whom he also considered friends, until 2017 when a fall forced his retirement. Stewart loved airplanes, his Dutch Master cigars, the accomplishment of hard work, his family, and his many many customers and business associates. His quiet, good natured demeanor will be missed by many. Family and friends can gather on Sunday, August 1st between the hours of 1-4 at the Family Life Center at Christ United Methodist Church to remember Stewart and celebrate his long and wonderful life. Condolences may be sent to the family at: www.mayhew-brownfuneralhome.com

The family of Stewart L. Riegel created this Life Tributes page to make it easy to share your memories.

Send flowers to the Riegel family.