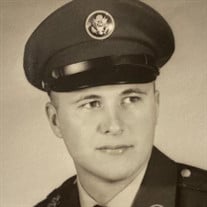 Steve Rhea, 79 of Jackson passed away peacefully with his family by his side on March 13, 2020. He was born March 6, 1941 in Jackson, Ohio to the late Gerald and Carol (Mapes) Rhea. He graduated from Jackson High School in 1959. He was married to Shirley Vance Rhea on September 16, 1962. Steve joined the Army in 1961 where he was promoted to the rank of Sergeant. Upon his return from the Army, he worked for the 7-Up company and then began his career with the DT&I Railroad in Jackson, before being transferred to Port Huron, Michigan. Upon his retirement in 1995, Steve and Shirley returned to Jackson, where they enjoyed many years on their beautiful property with their family. Steve took great pride in his work and being an excellent provider for his family. Steve is survived by his children: Sharelle (Greg) Gerstenberger and Shalan (Erica) Rhea all of Jackson, his greatest pride, his four grandchildren: Trevor Gerstenberger, Connor Gerstenberger, Carter Rhea and Cooper Rhea. He is also survived by his sister in law: Sharon Elam of Chillicothe as well as many nieces, nephews and cousins. He leaves behind his loyal canine companion, Duke. He was preceded in death by his parents, wife of 56 years, Shirley Rhea. Steve enjoyed the outdoors and spending time hunting, whether it was deer, turkey, squirrel or mushrooms. He was known to many as an excellent mushroom detective. Steve enjoyed nothing more than sharing these outdoor adventures with his grandsons or attending their sporting and school events. You did not leave steve’s home without being offered a meal, a comfortable chair, or fresh produce from his well-maintained garden. Steve was a member of the farmer sportsman, where he served a president. He was also a member of the Knights of Pythias. He was a founding member of the Liberty Township Volunteer Fire Department. Upon Steve’s request, there will be no formal services at this time. Arrangements are under the direction of the Mayhew-Brown Funeral Home. His family would like to thank the Jenkins Community Care staff for their excellent care and compassion for Steve in his final months.

Steve Rhea, 79 of Jackson passed away peacefully with his family by his side on March 13, 2020. He was born March 6, 1941 in Jackson, Ohio to the late Gerald and Carol (Mapes) Rhea. He graduated from Jackson High School in 1959. He was married... View Obituary & Service Information

The family of Steve Rhea created this Life Tributes page to make it easy to share your memories.

Steve Rhea, 79 of Jackson passed away peacefully with his family...

Send flowers to the Rhea family.