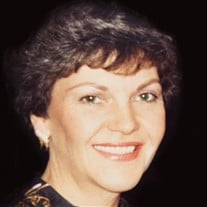 Shirley Ann Swingle Priest, age 85, of Jackson, Ohio, passed away on Tuesday, June 8, 2021, at the Four Winds Nursing Facility. Born on September 24, 1935, to Odis and Pauline Minard Swingle, Shirley grew up in Jackson with her brothers Jim, Kenny, and Frank Swingle and graduated from Jackson High School in 1954. She married well- known local businessman Jim Priest on January 21, 1956, and subsequently worked at Coll Auto Sales for 33 years as secretary, bookkeeper, and title clerk. Shirley was known by everyone who knew her as extremely intelligent, independent, artistic, witty, and totally devoted to her family, her children, and grandchildren. In addition, she was an active participant in school, community, and civic affairs; a member of Eastern Star, Emblem Club, and Jackson area Women’s Clubs; and a devoted fan of the Jackson Ironmen and The Ohio State Buckeyes. After retirement, Shirley kept busy reading, painting, and could often be found selling tickets at numerous JHS sporting events. Shirley was preceded in death by her husband Jim Priest in 1991, and her brothers Jim and Kenny Swingle. She is survived by her children, Marcia Taylor, Paula McCall, Brenda (John) Aubrey, and Josh Rippeth (Audra Atwood); her brother Frank (Linda) Swingle; grandchildren Sarah Taylor Martin, Sean (Meghan) Taylor, Chelsey McCall, D.J. Washam, Morgan Washam, Kimmi Aubrey, and Kelli Aubrey; great grandchildren, Ali Rippeth, Tori and Ian Martin, and Damon, Avery, Emelia, and Wyatt Taylor, and Meadow and Willow Washam; and her “most-favored” daughter–caregiver Miranda as well as several nieces and nephews. If a person’s life is measured by those whose lives and hearts they touch, then there can be no doubt that Shirley Priest exemplifies a “life well lived.” Funeral services will be held at 1PM Sunday, June 13, 2021 at the Mayhew-Brown funeral home with Pastor Janie Karl officiating and graveside services following at the Fairmount Cemetery. Family will receive friends 2 hours prior to the service from 11AM up to the time of the funeral. In lieu of flowers, memorial donations in Shirley name can be made to: Jackson County Heart Support Group, c/o Becky Mayhew, 215 Broad Street, Jackson, Ohio 45640. Condolences to the family may be sent to :www:mayhew-brownfuneralhome.com

The family of Shirley Ann Priest created this Life Tributes page to make it easy to share your memories.

Send flowers to the Priest family.