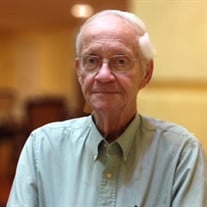 Samuel Berry Shumard was born October 17, 1932 in Cincinnati, Ohio. He passed away May 4, 2021 in Richmond, Virginia at the age of 88. A Jackson resident for 40 years, Sam and his wife Alice moved to Virginia in 2012 to be closer to family. Sam is survived by two daughters and sons-in-law, Sally Shumard and John Gibbs of Richmond, Virginia and Susan and Mark Krieger of Arlington, Virginia. He is also survived by three grandchildren, Samuel Taylor Gibbs, Victoria Rebecca Krieger, and Emma Katherine Tatone Krieger: sister-in-law Jo Ann Viox of Milford, brother-in-law, Sam Benzinger of Lebanon, and brother-in-law, Kenny Roberts of Ripley. He was preceded in death by his wife of 59 years, Alice Benzinger Shumard, his daughter Rebecca Lynn Shumard, and both parents, Victor Dale Shumard, Jr. and Gladys Berry Shumard. Sam was a kind gentleman. He was fiercely devoted to his family, friends, community, and country. Sam was proud of his involvement during the Korean conflict, serving in Japan as a cryptographer in the Army Signal Corps. He loved Jackson and the many friends made while living there. He loved the comradery he shared for many years with his Jackson breakfast group and was deeply proud of his years serving in Rotary. Sam, from a young age, was profoundly involved with his father’s car dealership and eventually also became a car dealer. Throughout his life he had many jobs, working for the City of Jackson and also at McNally Pittsburg in Wellston. He enjoyed the later years of his life living peacefully and comfortably in the presence of family in Virginia. Funeral services will be held at 2 p.m. Friday, May 14, 2021 at the Mayhew-Brown Funeral Home with Rev. Janie Karl officiating and burial to follow in the Fairmount Cemetery. The family will receive friends at the funeral home from 6 to 8 p.m. on Thursday, May 13. In lieu of flowers, the family requests donations be made to the Christ United Methodist Church, 150 Portsmouth Street, Jackson, Ohio 45640. Condolences can be emailed to http://mayhew-brownfuneralhome.

Samuel Berry Shumard was born October 17, 1932 in Cincinnati, Ohio. He passed away May 4, 2021 in Richmond, Virginia at the age of 88. A Jackson resident for 40 years, Sam and his wife Alice moved to Virginia in 2012 to be closer to family. Sam... View Obituary & Service Information

The family of Samuel Berry Shumard created this Life Tributes page to make it easy to share your memories.

Send flowers to the Shumard family.