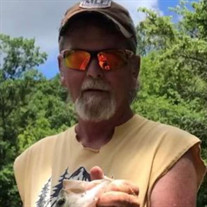 On Thursday, February 18, 2021 Roger Lee Miller age 60 of Oak Hill, Ohio went to be with his heavenly father.  Roger was born on December 23rd, 1960 to Ron and Annabelle Lewis Miller.  Roger was preceded in death by his father Ron and his best friend Danny (Porkchop) Matthews.  He is survived by his mother Annabelle of Oak Hill, his brother Marlin (Sandy) Miller of Dearborn, Ohio and his wife Valorie Yates Miller.   On December 13th, 1985 Roger married Val, the true one and only love of his life, and together they raised their daughter Brooklyn Moore (Josh), and their bonus daughters Carla Taylor (Sean) and Stacey Davidson (Matt).  Roger will also be sorely missed by his grandchildren Kynslie, Parker and Jordyn Moore, Jessica Taylor, MaKayla and Carter Davidson, and several nieces and nephews.   Roger is also survived by many brother and sister-in-law’s. Linda (Herb) Simpson, Randy (Alison) Yates, & Aric (Patty) Yates. He had a host of special friends including Dakota Keeton, Shania Boswell, Teresa & Levi Matthews as well as several others.   Roger prided himself in being an entrepreneur owning his own logging business and then becoming the owner-operator of Miller Trucking company.  Roger loved to hunt and fish with his family, many friends and associates.  He was a proud member of the Lunker Hunter Bass Club for many years. He will always be remembered for his loving and joking lifestyle as well as his adamant belief in living a slower and more deliberate pace of life.     A funeral service will be held at 2PM on Sunday, February 21st, 2021 at the Mayhew-Brown Funeral Home in Jackson. Family will receive friends from 11AM up to the time of the service at 2PM. Memorial donations in Rogers name can be sent to: Ohio Valley Bank, C/O Valorie Miller, 740 East Main Street, Jackson, Ohio 45640. Condolence can be sent to:www.mayhew-brownfuneralhome.com

On Thursday, February 18, 2021 Roger Lee Miller age 60 of Oak Hill, Ohio went to be with his heavenly father.  Roger was born on December 23rd, 1960 to Ron and Annabelle Lewis Miller.  Roger was preceded in death by his father Ron and his best... View Obituary & Service Information

The family of Roger Lee Miller created this Life Tributes page to make it easy to share your memories.