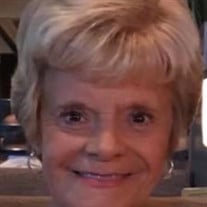 Rita Marlene (Sheward) Miller, age 78, formerly of Jackson, Ohio passed away Sunday, February 21, 2021 at The Kemper House in Worthington, Ohio. She was preceded in death by her loving husband of 55 years, Michael “Mike” Miller. She was born August 20, 1942 in Oak Hill, Ohio to the late Edward Delaney, and Glenna Marie Sheward (Harry F. Sheward). She graduated from Jackson High School in 1960, and Rio Grande College, with a degree in Elementary Education in 1964. Her teaching career began in Norwalk, Ohio. She also taught in Port Clinton, Ohio, Schenectady, New York, and Jackson, Ohio. She went on to specialize in Remedial Reading. After retirement, Rita continued to serve students as she volunteered to work to prepare them for the Ohio State Proficiency Tests. She loved working with children and helping them to reach their full individual potential. Her students loved her as well, and many stayed in close contact with her over the years. She was a loyal member of Trinity United Methodist Church in Port Clinton, Ohio, and Christ United Methodist Church in Jackson, Ohio. Mike and Rita most recently attended Life Point Church, in Lewis Center, Ohio. She enjoyed involvement in community events and was a member of the Port Clinton Junior Woman’s Club, past-president. She also belonged to the Port Clinton Yacht Club and volunteered for a number of different local events while living there. After moving to Jackson, she became an active member of the Jackson Women’s League, the Jackson City Education Association, and she was also a member of the Jackson Retired Teachers Association. Rita loved dogs, 50’s music, dancing, football, cooking and baking, the Apple Festival, and watching her grandchildren play sports. She is survived by her daughter, Michelle (Gary) Mann, and grandsons, Brett and Beau Boggs. Graveside services will be held at 1:00 p.m., Monday, June 21, 2021 at the Fairmount Cemetery in Jackson, Ohio with a celebration of life gathering to follow at the house of Patty Davis, 207 Redondo Drive, Jackson, Ohio 45640. Memorial donations in Rita’s name can be made to the Alzheimer’s Association at alzfdn.org, or Life Point Church 7719 Graphics Way STE B, Lewis Center, Ohio 43035. Memorial contributions may also be made to the charity of the donor’s choice. Funeral services are under the direction of the Mayhew-Brown Funeral of Jackson, Ohio. Condolences can be sent to: www.mayhew-brownfuneralhome.com

The family of Rita Marlene Miller created this Life Tributes page to make it easy to share your memories.