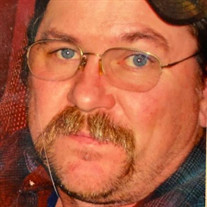 Richard “Dick” McKinley Russell, Jr., age 55 of Ray, passed away at Ohio State University Hospital in Columbus on Tuesday, December 29, 2020. He was born in Circleville, Ohio on March 23, 1965 to the late Richard M. Russell, Sr., and Charlotte “Drake” (Jenkins) Newlan, who survives. In addition to his mother, he is survived by his wife, Rhonda Lee (Tennant) Russell; children: Richard M. Russell, Robyn Mae Russell (Wayne Harrell), Mark Anthony Easterday, Jr., and a grandson whom he was raising, Richard Mickeal “Mikey” Russell, and a granddaughter, Khloe Lee Harrell. Also surviving are his siblings: Terry “Spike” Russell (Kathy) of Londonderry, Elizabeth (Danny) Russell of Circleville, Debbie (Tony Neil) Russell of Springfield, Donnie Humphrey of Columbus and Tina Wagner of Columbus. His step-mother, Darla Russell and several nieces, nephews and cousins also survive. He was preceded in death by his father; his children's mother, Cheryl Russell; a sister, Darla Justice; a brother, Jeffery Walter Russell; and a grandson Wayne Harrell Jr. Dick worked at Cardinal Carpet for many years. He loved car racing at Atomic Speedway. He was a huge Ohio State football fan. He enjoyed spending time with his family and working in the yard. Funeral services will be held at the Mayhew-Brown Funeral Home on Wednesday, January 6, 2021 at at 11:00 a.m., with Bill Taylor officiating. Burial will follow at Tennant Cemetery The family will receive friends at the funeral home on Tuesday, January 5th from 6:00 – 8:00 p.m. In lieu of flowers and other tributes, the family has requested contributions be made to the Mayhew-Brown Funeral Home to help with funeral expenses. Due to the current COVID-19 pandemic, for those opting to attend the visitation and/or funeral service, face masks are required inside the funeral home. Proper social distancing must also be maintained. We thank you for your cooperation. Condolences may be sent to the family at: www.mayhew-brownfuneralhome.com

The family of Richard "Dick" M. Russell Jr. created this Life Tributes page to make it easy to share your memories.

Send flowers to the Russell family.