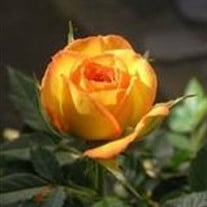 Peggy Ann McCormick, age 77, was born on November 23, 1941 and passed peacefully at 10:45 a.m. on Thursday, October 10, 2019. Preceded in death by parents, Isaac and Belva (Yearian) McCormick, 2 brothers, James McCormick and Talmer McCormick, 3 sisters, Blanche Kanouse, Stella Salyers and Virginia Bitner and one great grandchild, Madison Cooper. She is survived by 6 children, Edna (Michael) Fisher, Norman Barbee, Tina Barbee, Gina Neff, Russell Baker and Hope Smith. She is also survived by 4 sisters and 1 brother, Arlene (Damon) Music, Darlene (Bob) Barbee, Annus Stewart, Ruth (Sam) Leach and Charles (Lynn) McCormick plus numerous nieces and nephews, 12 grandchildren and 11 great grandchildren. In lieu of flowers please make donations to the Mayhew-Brown Funeral Home. A funeral service will be held at the Mayhew-Brown Funeral Home on Sunday, October 13th, 2019 at 2PM with Rev. Robert Barbee officiating. Family will receive friends from 12PM up until the time of the service at 2PM. Burial will be at the convenience of the family. Arrangements are under the direction of the Mayhew-Brown Funeral Home in Jackson. Condolences may be sent to: www.mayhew-brownfuneralhome.com

The family of Peggy A. McCormick created this Life Tributes page to make it easy to share your memories.

Send flowers to the McCormick family.