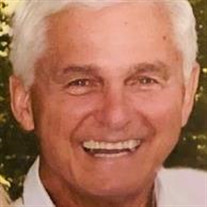 Michael Lee “Mike” Miller, age 77 of Delaware, Ohio formerly of Jackson, Ohio passed away Thursday, October 31, 2019 at The Inn at Olentangy Trail in Delaware, Ohio. He was born September 21, 1942 in Jackson, Ohio to the late Raymond E. and Anita M. Hanley Miller. He graduated from Jackson High School in 1960, attended Rio Grande College, Ohio University, Miller-Motte Business College in North Carolina, and graduated from Tiffin University with a degree in Business Technology in 1974. He was a veteran of the United States Marine Corps, where he served his country proudly. He was a 25 year Mason, and served as Past Master of the Jackson Lodge. He was a 32nd degree Mason and a member of the Aladdin Shriners in Columbus, Ohio. Mike was the true definition of a devoted family man and a strong, faithful Christian man. He never met a stranger and was the ultimate jokester! He was an avid golfer, a fan of Ohio State and Cleveland Brown football, and Reds baseball. He enjoyed collecting sports memorabilia and a variety of coins. Mike owned and operated Sheward Insurance Agency Inc, in Jackson for 32 years. Prior to the insurance business he worked for Standard Products Company, in Port Clinton, Ohio and Campbell Plastics, in Schenectady, NY. Mike was an over-achiever, to say the least! He served on the Jackson Chamber of Commerce Board, Lion’s Club Board of Jackson, including Past President, the Independent Insurance Agents of Ohio Board including Past President, and received the Paul Revere Award for Outstanding Achievement. He served on The Professional Insurance Agents of Ohio and The Independent Insurance Agents of Ohio, and served as President. Additionally, he served on the Administrative Board of Christ United Methodist Church, the Board of Trustees, and the Finance Board. He is survived by his wife of 55 years: Rita Sheward Miller, daughter: Michelle (Gary) Mann, grandsons: Brett and Beau Boggs. He was preceded in death by his parents and one brother, George Stephen Miller. Graveside memorial service will be held at 3:00PM Sunday, November 3, 2019 at the Fairmount Cemetery in Jackson, Ohio with Pastor Dean Fulks officiating and military honors by the Jackson Chapter 45 DAV. An Open House will follow at the home of Patty Davis at 207 Redondo Drive from 4:00 PM to 6:00 PM. In lieu of flowers, memorial donations in Mike’s name can be made to: American Cancer Society, 1313 Dorothy Ln, Dayton, Ohio 45409 or Trowel Lodge #132 F.&A.M., c/o Masonic Temple, 235 Pearl Street, Jackson, Ohio 45640. Memorial contributions may also be made to the charity of the donor’s choice.

The family of Michael Lee "Mike" Miller created this Life Tributes page to make it easy to share your memories.