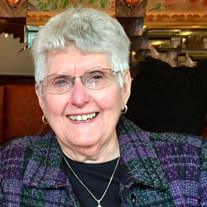 Lois Ann Rose passed away on April 20, 2021 at the Eastern Star Retirement Home in Mt. Vernon, Ohio, where she resided during her final days due to declining health. Ann was born on May 19, 1931 and was a life-long resident of Jackson, Ohio, as were her parents, Willard and Edna Bowman, her grandparents, and great-grandparents. She was a 1949 graduate of Jackson High School. In 1950 she married Dave Rose, a WWII veteran who landed on Omaha Beach during the D-Day Invasion of June 6, 1944. Dave was a graduate of Oak Hill High School where he was a captain of the varsity football team. In 1959, they purchased a house on Center Street that became their permanent home. Together they reared four sons, all of whom graduated from Jackson High School. A longtime employee of the Jackson City School System, Ann was the attendance officer while her boys were in school and then later became a full-time secretary at the high school where she remained until her retirement. Ann was a member of Christ United Methodist Church where she enjoyed Bible studies, Sunday worship services, and Rev. Janie Karl’s regular visits. She was a past member of the Junior Women’s League of Jackson and the Garden Lovers Club. While a member of the Garden Lovers Club, she played an active role in getting the Big Leaf Magnolia designated as the official Jackson County wildflower. At home she was an avid reader, gardener, seamstress, and knitter. Of her many points of interest, none made her prouder than belonging to the community of Jackson - where she grew up, married, raised a family, and fostered many enduring friendships. Surviving are two sons: Mike (Bonnie) Rose of Staunton, VA and Kim (Pam) Rose of Mt. Vernon, OH. Three grandchildren: Soren (Emily) Rose of Alexandria, VA, Sam (Erin) Rose of St. Augustine, FL, and Hannah Rose of Syracuse, NY. Two great-granddaughters: Molly and Lydia Rose. She was preceded in death by her husband; two sons, Mark and Milo; and her brother, Charles E. (Tad) Bowman. A funeral service will be conducted under the direction of Mayhew-Brown Funeral Home via live stream on Friday, April 23, 2021 at 11:00 AM with Rev. Janie Karl officiating. For those choosing to view the service, click on the following: www.mayhew-brownfuneralhome.com; click on Lois Ann Rose obituary; to find the link to the 11:00 a.m. Friday service, click on photos and videos and the link to the service will be there. In lieu of flowers, memorial donations may be made to Christ United Methodist Church, 150 Portsmouth Street, Jackson, OH 45640.

Lois Ann Rose passed away on April 20, 2021 at the Eastern Star Retirement Home in Mt. Vernon, Ohio, where she resided during her final days due to declining health. Ann was born on May 19, 1931 and was a life-long resident of Jackson, Ohio,... View Obituary & Service Information

The family of Lois Ann Rose created this Life Tributes page to make it easy to share your memories.