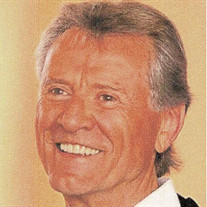 Dr. Layne Alan Longfellow, 81, educator, writer, humorist, musician, composer and world traveler died peacefully after a lengthy illness at his home in Prescott, Arizona, on January 12, 2019. He was born on October 23, 1937, in Jackson, Ohio, the son of the late Hershel and Opal Longfellow. Dr. Longfellow was a graduate of Jackson High School, Ohio University (Phi Beta Kappa, Magna cum Laude), and the University of Michigan, where he completed a Ph.D. in Experimental Psychology. Following that, he received a number of post-doctoral fellowships, most notably a National Institute of Mental Health award to work with Dr. Carl R. Rogers, one of the founding fathers of psychotherapy research. In his varied career, Layne taught at Reed College in Portland, Oregon, and later was Academic Vice- President of Prescott College in Prescott, Arizona, where he helped design a curriculum that integrated wilderness experience and academic studies. In 1974, he was hired to be the Director of Seminars for Executives at the renowned Menninger Foundation in Topeka, Kansas, a post which led to an illustrious career as a professional speaker and seminar leader. In 1978, at age 40, Layne established his own company, Lecture Theater, Inc., a forum for the presentation of provocative issues with the help of spoken words, songs, humor, piano music and photographs. Through his company, Layne presented well over 2000 multi-media speeches and seminars to audiences and organizations internationally. Layne was elected to the National Speaker's Association Hall of Fame in 1985, and later awarded the rare and highly prized title of 'Legendary Speaker' by his colleagues in the Association. In 2007, Layne, who served as the Longfellow Poetry Ambassador for the Friends of Longfellow National Historic Association, was the host at the 200th birthday celebration of Henry Wadsworth Longfellow and followed up that same year with a reading of Longfellow poetry at the National Gallery of Art in Washington, DC. His subsequent recording of Longfellow’s poetry was highly acclaimed. Dr. Longfellow's list of awards, distinctions and recognitions is long, as is the number of writings, both professional and popular, including articles in distinguished journals and popular magazines, books, audio presentations and DVDs. Layne was preceded in death by his parents and is survived by his long-time companion, Neera Tandon, of Prescott. Visitation for Dr. Layne Longfellow will be held from 11:00 to 1:00 Monday Jan. 21 at the Mayhew-Brown Funeral Home with funeral service to follow. The service will include a short video presenting highlights of Layne’s life and speaking career. All are invited to share memories of their time with him. Burial will follow in Fairmount Cemetery. Contributions may be made in Layne's honor to the Jackson High School Alumni Association, 450 Vaughn St., Jackson, OH, 45640. A celebration of Layne's life will be held for his many friends and acquaintances in Prescott, Arizona, in April, at a date to be determined.

The family of Layne Allen Longfellow created this Life Tributes page to make it easy to share your memories.

Send flowers to the Longfellow family.