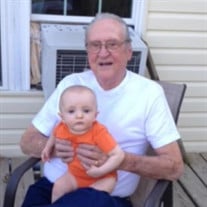 Kenneth Henderson age 90 of Jackson, Ohio passed away on the evening of January 4th, 2021 at his place of residence at Four Winds Community in Jackson, Ohio after a bout with COVID19.  A special THANK YOU goes out to the caring and loving staff at Four Winds Community for taking such wonderful care of our father, he was special and they made him feel special each and every day, always kind words from the staff about dad. Kenny was born in Jackson County, Ohio on August 28th, 1930 and grew up on a farm with dogs and horses that he dearly loved.  He later enlisted in the U.S. Navy and served his country during the Korean War, he was honorably discharged and returned to Jackson to make his mark.  He worked for the DT&I car shops in Jackson for a short time and then enrolled at The Ohio State Barber College in Columbus, Ohio.  He served his barbering apprenticeship in Grove City then returned back to Jackson and opened his first shop on David Avenue and married Ruth Hughes(deceased) also of Jackson.  Kenny and Ruth were blessed with two children while he barbered, raised beagles and even owned a few racing horses.  Kenny barbered in both Jackson and Wellston at different times during his career and he was well known in the community.   Kenny will be greatly missed by his family and the many friends he made even unto his death. Kenny was preceded in death by his wife Ruth(Hughes) Henderson, Sisters Jean (Gus) Padilla (both deceased), Shirley (John, living) Garrett, Brothers Bob Henderson, Duane (Louis, deceased) Henderson, His Father and Mother Lewis and Chloe (Wyant) Henderson. Kenny Leaves behind a sister Midge (Walter, deceased) Deacon of Waverly, Ohio and a brother Jerry (Beverly) Henderson of Jackson, Ohio,  Son Timothy (Mary) Henderson of Jackson, Ohio and Daughter Tammy Morrissey of Chillicothe, Ohio.  Grandchildren Jessica (Mike) Butsko and great granddaughters Adeline and Madelyn of Upper Arlington,  Amanda (Chase) McCain and great grandchildren Elizabeth, Gabriell, Jace and Lillyanna of Grove City, Ohio,  Grandson Tyler (Hanna) Morrissey and the many nieces and nephews whom he loved dearly. In lieu of flowers please make a generous donation to the Jackson County Dog Shelter in Kenny's memory for his love of animals. As per a request of the family no calling hours will be available for the safety of all. A Celebration of life will be set at a later date for family and friends. Condolences may be sent to the family at: www.mayhew-brownfuneralhome.com Funeral arrangements are under the direction of the Mayhew-Brown Funeral Home in Jackson.

Kenneth Henderson age 90 of Jackson, Ohio passed away on the evening of January 4th, 2021 at his place of residence at Four Winds Community in Jackson, Ohio after a bout with COVID19.  A special THANK YOU goes out to the caring and loving staff... View Obituary & Service Information

The family of Kenneth W. Henderson created this Life Tributes page to make it easy to share your memories.

Kenneth Henderson age 90 of Jackson, Ohio passed away on the...

Send flowers to the Henderson family.