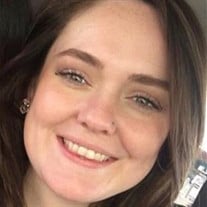 Kaysey Lorinne Adkins, age 29, of Jackson, passed away on Saturday, February 2, 2019 at her residence. She was born on December 9, 1989 in Gallipolis, Ohio to Jeffrey Wayne Adkins and Melinda Lou (Haddox) Adkins. In addition to her mother she was preceded in death by a grandfather, Clarence David Haddox; and great-grandparents, Clarence and Gertrude Adkins. Kaysey was lovingly refered to by her mother as “Doodle Bug” and as “Wednesday” by her aunt, Kim Yates. Kaysey, a good, kind soul was a kid at heart. She loved animals, concerts, watching horror movies and Disney. She spent time volunteering with the Jackson County Homelessness Committee. Most of all, her entire world revolved around her daughter, Everlee. She is survived by her father, Jeffrey Wayne (Rebecca) Adkins; her daughter, Everlee Zaine Rhea; her sister, Ally Corinne (Dana) Marks; her brother, Jeffrey Wayne Adkins Jr.; two step-brothers, Michael Allen Stevens and Austin Tyler Malone; a step-sister, Julie Marie Malone; special aunt and uncle, Melissa and James Nicholson, James was her first best friend, loved her from the start; nephews, Remington and Garrick Marks; niece, Alexsiya Marks; her grandmothers, Ruby Yates and Mollie Gilliland along with many loving aunts, uncles, cousins and friends; her boyfriend, Dylan Clay Bowling; her best friend, Caitlin Gross and also her LaRosa's family. A funeral service will be held at the Mayhew-Brown Funeral Home on Saturday, February 9, 2019 at 2:00 p.m. Family will receive friends at the funeral home from 10:00 a.m. up until the time of the service at 2:00 p.m. In lieu of flowers, the family requests donations be made to the Mayhew-Brown Funeral Home, 135 Broadway St., Jackson, Ohio 45640. Arrangements are under the direction of the Mayhew-Brown Funeral Home in Jackson. Condolences may be sent to: www.mayhew-brownfuneralhome.com.

Kaysey Lorinne Adkins, age 29, of Jackson, passed away on Saturday, February 2, 2019 at her residence. She was born on December 9, 1989 in Gallipolis, Ohio to Jeffrey Wayne Adkins and Melinda Lou (Haddox) Adkins. In addition to her mother she... View Obituary & Service Information

The family of Kaysey Lorinne Adkins created this Life Tributes page to make it easy to share your memories.

Kaysey Lorinne Adkins, age 29, of Jackson, passed away on Saturday,...

Send flowers to the Adkins family.