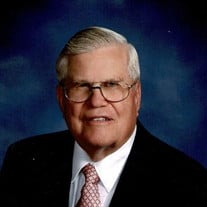 John Francis Underwood, age 90, resident of Stone Oak Retirement Community in Hilliard, Ohio, formerly longtime resident of Jackson, Ohio died October 31, 2018. Born on June 12, 1928 in Ithaca, New York to the late Francis O and Erma (Hollen) Underwood. He was a 1950 graduate of Michigan State University then earned his Masters of Science in agronomy from Cornell University in 1952. After college he joined the U.S. Army and attained the rank of Corporal. While stationed at Fort Detrick, in Frederick, Maryland, he met Roxie Montgomery whom were married on September 10, 1955 at Calvary United Methodist Church in Frederick, Maryland. They enjoyed the first 2 years of their lives together in St. Croix, Virgin Islands, in his final years of the Army service. John was employed as an agronomist and professor for The Ohio State University for over 23 years basing his work from the Area Research Station in Jackson, Ohio where no-till crop production, reclaiming strip-mined land for crop production, and eliminating multi-floral rose from southern and eastern Ohio hillsides were his focus. John was an active member of Christ United Methodist Church in Jackson serving on the leadership board in many positions, including board president. In 2011 he culminated a multi-year effort of preserving the history of the church and region in a 260-page book titled, "The History of Christ United Methodist Church, Jackson, Ohio 1805-2007" serving as the committee chair and lead publisher. John is survived by his wife of 63 years, Roxie, and four daughters, Ann Underwood (Ken Phares), Marilyn Underwood, Daphne Moehring (Boyd), and Joan Mast (Maurice). In addition, he is survived by grandchildren Hallie and Mallory Moehring, Klara and Isaak Underwood, and Lance Mast. Also by, sister Ruth U Friesenborg (Nelton) of Sun City West, AZ, sister-in-laws Frances Cecil of Frederick, MD, and Charlotte Montgomery of Ijamsville, MD, brother-in-law David Montgomery (Becky) of Ijamsville, MD. In addition to his parents, preceded in death are in-laws, I Rayner and Pauline Montgomery, brothers-in-law James O Montgomery and John W Montgomery, Donald Cecil. John was active in the Jackson-Vinton Farm Bureau, American Legion Post 81, assisted Roxie caring for the city trees as well as the church landscaping, United Methodist Men’s group, PTA officer and Girl Scout leader, enjoyed playing many years with the Michigan State University marching alumni band. Friends may call at Christ United Methodist Church, 150 Portsmouth St., Jackson OH on Saturday, November 3, 2018 from 9am to 11am with service following at 11am. Burial will be in Frederick, Maryland at Mt. Olivet Cemetery on December 1, 2018. In lieu of flowers, memorial contributions may be made to: Christ United Methodist Church Building Fund. Arrangements are under the direction of Mayhew-Brown Funeral Home in Jackson. Condolences may be sent to: www.mayhew-brownfuneralhome.com

The family of John Francis Underwood created this Life Tributes page to make it easy to share your memories.

Send flowers to the Underwood family.