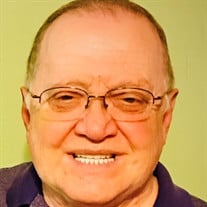 John Paul Rupert, 76, of Jackson, Ohio, passed away February 4, 2021, at Adena Medical Center, Chillicothe, Ohio. Johnny was born, October 2, 1944, in Jackson, Ohio, to Elmer and Laura (Nicholson) Rupert (both deceased). He attended Jackson High School in Jackson, Ohio, class of 1962. He continued his education at Ohio State University in Columbus, Ohio. For over 53 years, he enjoyed Amateur Radio (W8GPA and K8NCJ) where he made many contacts and friends, by voice and morse code. He loved his family and was always available to help anyone in need. He could build a house, work a farm, work with electrical and communication equipment, and setup computers, a true ‘Jack of All Trades’. He served four years in the Air Force, and was honorable discharged. He retired from GTE (local phone company) and then also retired from Capital University. He was musically talented, he played trombone, baritone, and piano. He loved playing cards, it was an activity that was enjoyed by his mother, wife, and kids. He was a member of Grange, Masons, helped with Boy Scouts, and started the Local Amateur Radio Club. He worked with FEMA and Emergency Response Teams, providing a communication grid, during emergencies. He was always working on radios and the smell of solder was always in the air. In his retirement, he loved working on radios, talking with people all over the world, watching the wildlife around his home and spending time with his wife, kids, and grandkids. He also, loved fishing with the grandkids. He is survived by his wife of 54 years, Penny (Walker) Rupert of Jackson, Ohio; his children, John F (Jay) Rupert of Jackson, Ohio, Melissa Caulkins (Duane) of Clarkston, Michigan, Beth Grubaugh (Robert) of Miami, Florida, and Christopher Rupert of Columbus, Ohio; grandkids, Andrew John (AJ) Caulkins of Arlington, Virginia, Kyrsten Caulkins of Saint Clair Shores, Michigan, Gregory Rupert, Xavier Rupert, and Casey Rupert, all of Jackson, Ohio, Kaitlyn Grubaugh and Lillian Grubaugh, both of Miami, Florida. Condolences may be sent to the family at www.mayhew-brownfuneralhome.com Arrangements are by the Mayhew-Brown Funeral Home in Jackson.

The family of John Paul Rupert created this Life Tributes page to make it easy to share your memories.

Send flowers to the Rupert family.