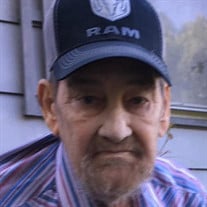 John Rose, age 85, departed this earth on Thursday, July 9, 2020. He was born in Portsmouth, Ohio on April 16, 1935 to the late Roy and Minnie (Stiles) Rose. He attended the Fourmile Christian Church. He was an employee of D.T.&I Railroad for 16 years, working out of Flat Rock, Michigan. He was also a former employee of Coll Auto Sales in Jackson. John was married to Cindy Hill on August 31, 1957, who survives. They had three children: John Ed (Melody) Rose Jr. of Jackson, Sgt. Douglas E. (Mandi) Rose of Keene, New Hampshire, and LaCinda Lynn Rose (Micky) Kincaid of Jackson. John and Cindy celebrated their 50th wedding anniversary – renewing their vows in Lakeland, Florida – and with an openhouse for their 60 years. They had been married almost 63 years when they were separated by death. John and Cindy had twelve grandchildren: Jonathon Rose, John (Tasha) Rose III of Jackson, Christina (Bobby) Hivley of Jackson, Laci (Andy) Hilderbrant of Oak Hill, Ronald Marvet of Colorado Springs, Trevor, Bobi and Tabitha Rose of Alabama, Dayanaira of Louisiana, Dillon and Tianna Sepiro of New Hampshire, and Stephen Michael Williams who passed away in June, 2018 after a lenghthy illness. John had three sisters: Norma Dow of Jackson, Delores Hughes and Mary King of Oak Hill; and three three brothers: Larry Rose of North Carolina who survives; Leroy (Bud) Rose and Roger Dale Rose who proceeded him. John has 10 great-grandchildren, many nieces, nephews and friends. Funeral services will be held at the Mayhew-Brown Funeral home on Saturday, July 11th at 1:00 p.m. with Pastor Skip Domigan officiating. The family will receive friends 2 hours prior to the service from 11:00 a.m. - 1:00 p.m. In lieu of flowers, the family requests donations be made to the Jackson County Heart Support Group, 215 Broad Street, Jackson, Ohio 45640. Condolences may be sent to the family at: www.mayhew-brownfuneralhome.com Arrangements are by the Mayhew-Brown Funeral Home in Jackson.

John Rose, age 85, departed this earth on Thursday, July 9, 2020. He was born in Portsmouth, Ohio on April 16, 1935 to the late Roy and Minnie (Stiles) Rose. He attended the Fourmile Christian Church. He was an employee of D.T.&I Railroad... View Obituary & Service Information

The family of John Rose created this Life Tributes page to make it easy to share your memories.