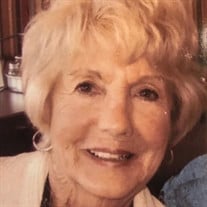 Joan (Joanie) Yuenger Call, age 89, of Jackson, passed away peacefully at home Sunday, January 13, 2019. She was born June 29, 1929 in Portsmouth, Ohio to the late Ralph and Lennis (Beekman) Yuenger. She was a graduate of Portsmouth High School where she was “Miss Trojan” 1948. She was involved with many organizations in Portsmouth before relocating to Jackson in 1974. She was a former member of the Jackson Women's League and the Jackson Arts Council. Joan was a very active member of the Holy Trinity Catholic Church and member of the Altar Rosary Society. She also belonged to a birthday club with all of her girlfriends and volunteered for the American Cancer Society. She loved shopping trips with her daughters, gardening and spending time with her family and friends. Joan was preceded in death by her loving husband, Lowell; her son, Jason; her brother, David Yuenger; grandsons, Curt Pendleton and Aubrey Webb; and great granddaughter, Delilah. She is survived by her 6 children: Greg Call (Katrina Campbell) of Jackson, Jenifer (Steve) Pendleton of Minford, Ohio, Cindy (Jon) Webb of Columbus, Ohio, Becky (Brent) Davis of Nashville, Tennessee, Angie (Eric) Brown of Bellefontaine, Ohio, Kim (Steve) Denney of Marysville, Ohio; her brother, Donald Yuenger of Portsmouth, Ohio; 15 grandchildren, 16 great grandchildren and many nieces and nephews. Friends may call at the Mayhew-Brown Funeral Home on Thursday, January 17th from 4:00-8:00 p.m. with the Rosary Service at 7:45 p.m. Mass of Christian Burial will be held at the Holy Trinity Catholic Church on Friday, January 18th at 11:00 a.m. with Father Nic Ventura officiating. Burial to follow at Mt. Olivet Cemetery. In lieu of flowers, the family requests donations be made to the Curtis Pendleton Scholarship Fund at Desco Federal Credit Union, 575 West Street, Minford, Ohio 45653 or the Holy Trinity Catholic Church, 215 Columbia St., Jackson, Ohio 45640. Arrangements are under the direction of the Mayhew-Brown Funeral Home in Jackson. Condolences may be sent to: www.mayhew-brownfuneralhome.com.

Joan (Joanie) Yuenger Call, age 89, of Jackson, passed away peacefully at home Sunday, January 13, 2019. She was born June 29, 1929 in Portsmouth, Ohio to the late Ralph and Lennis (Beekman) Yuenger. She was a graduate of Portsmouth High... View Obituary & Service Information

The family of Joan "Joanie" Yuenger Call created this Life Tributes page to make it easy to share your memories.

Send flowers to the Call family.