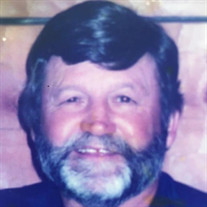 James C. Ridge, 84, of Jackson, passed away Thursday, April 7, 2022 at his home. He was born April 13, 1937 to the late Nara and Bernice Wilson Ridge in Jackson, Ohio. Jim graduated in 1955 from Jackson High School and was a proud member of the 1953 and 1954 Championship football teams at JHS. Shortly after high school, he enlisted with the U.S. Marine Corp where he served 2 years. He married Phyllis Wiley on December 20, 1961. Jim worked for over 30 years at GTE as a telephone repairman until his retirement. Jim was a member of Christ United Methodist Church of Jackson and was an avid outdoorsman who loved bow hunting, fishing, and gardening. He had an interesting and sometimes outlandish story for just about any topic, but the stories were all true. He was tough, hard working, had a wonderful sense of humor, and was fun to be around. Surviving are his wife of 60 years, Phyllis Ridge; daughters Kristie (Brian) Moore and Michelle (Steve) Sanborn; granddaughters (to whom he was known as Pappy) Kendra Perry, Molly Moore, and Courtney Perry; a brother, Bob Ridge and a sister, Betty Beatty and a multitude of family and friends. Preceding him in death were his parents; a brother, Kenneth Ridge and a sister, Carole Ridge. Visitation will be held on Sunday, April 10, 2022 from 3-6 p.m. at the Mayhew-Brown Funeral Home of Jackson, Ohio. The service will be held on Monday, April 11, 2022 at 11:00 a.m., also at the funeral home. Jim was fiercely loyal to his family and will be greatly missed every moment until we all meet again. The family wishes to thank the staff at Jackson Area Regional Dialysis for the excellent care he received for the last four years. In lieu of flowers and gifts, we request memorial donations be made to the American Kidney Fund at kidneyfund.org or mailed to 11921 Rockville Pike, Suite 300, Rockville, MD 20852 or information may be picked up at the Mayhew-Brown Funeral Home.

James C. Ridge, 84, of Jackson, passed away Thursday, April 7, 2022 at his home. He was born April 13, 1937 to the late Nara and Bernice Wilson Ridge in Jackson, Ohio. Jim graduated in 1955 from Jackson High School and was a proud member... View Obituary & Service Information

The family of James Carl Ridge created this Life Tributes page to make it easy to share your memories.

Send flowers to the Ridge family.