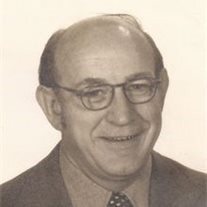 Eugene Ludwick Dunn, age 84, of Jekyll Island, Georgia, passed away Sunday, August 26, 2012 at Four Winds Community in Jackson, Ohio. He was born in Portsmouth, Ohio on December 1, 1927. He was preceded in death by his parents, Delma and Elmer Dunn of Portsmouth. He is survived by his loving wife of 60 years, Lois F. Dunn, and their four children: Stephen Dunn, and wife Carol, of Champaign, Illinois; Sibbie Chamberlain, and husband Dave, of Jackson, Ohio; Dan Dunn of Cincinnati, Ohio; and Andy Dunn, and partner Kathleen Kaczor, of Lake Oswego, Oregon. He is also survived by his older brother Jim Dunn of Cincinnati, Ohio; as well as four grandchildren: Keegan Chamberlain, and wife Dara, of Hilliard, Ohio; Casey Chamberlain, and wife Kristin, of Chillicothe, Ohio; Kyle Dunn and Brian Dunn of Champaign, Illinois. Also surviving are three great-grandchildren: Adelyn, Alexis, and Kael Chamberlain, of Hilliard, Ohio. Eugene (Gene) worked for 35 years as metallurgical engineer for General Electric, mostly in Cincinnati, Ohio, but also for a time in San Jose, California. He patented his own titanium alloys and traveled the world as a quality control engineer and company liaison for GE's jet engine manufacturing operations. He also served in the Army Air Corps in Georgia and Greenland during 1946-47 achieving the rank of sergeant, worked as a musician in big bands during his college years and as a teacher for a year in Portsmouth, Ohio after college. He attained a BS in Education from Ohio University in 1950; a Masters in Education from Ohio University in 1951; and an engineering degree from Xavier University in Cincinnati in 1952. Gene had a lifelong love of music, animals, fine food, travel, and laughter among friends and family, and a lifelong dislike of Chevys, Republican politics, and the Dallas Cowboys football team. A generous donor to various charities, Gene was also a devoted member of the Methodist Church and the Lion's Club. After taking an early retirement from GE, he and Lois moved from Cincinnati to Jekyll Island where they lived from 1987 until 2011, when they moved back to Ohio to be closer to their daughter Sibbie, who has taken good care of them. Gene was a kind and gentle soul who will be deeply missed. Friends and family are invited to a visitation at 11 a.m. and a memorial service at noon on Friday, August 31, at the Mayhew-Brown Funeral Home, 135 Broadway Street in Jackson, Ohio. In lieu of flowers, please make donations to the Four Winds Community Activity Fund, 215 Seth Avenue, Jackson, Ohio 45640-9405.

Eugene Ludwick Dunn, age 84, of Jekyll Island, Georgia, passed away Sunday, August 26, 2012 at Four Winds Community in Jackson, Ohio. He was born in Portsmouth, Ohio on December 1, 1927. He was preceded in death by his parents, Delma and Elmer... View Obituary & Service Information

The family of Eugene Ludwick Dunn created this Life Tributes page to make it easy to share your memories.

Send flowers to the Dunn family.