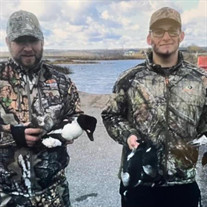 Dustin “Dusty” Lanhart, 44 of Jackson passed away Sunday, November 21, 2021 at the Mount Carmel Hospital in Grove City, Ohio following a brief illness. Dustin was born June 14, 1977 to parents Donald and Donna (Christian) Lanhart who survive. He is survived by children: Gabriel “Gabe” Lanhart and Abigail “Abby” Lanhart of Jackson, siblings: Shawn (Jessica) Lanhart of Frankfort, Ky, Kimberly (Eric) Culwell of Jackson, Ohio and Holly (Ryan) Marquardt of Lansing, MI, fiancee: Jessica Sisk and her children, Keira and Rachel Sisk. He was also survived by a niece , several nephews and special friend and “brother” George Taylor. He was preceded in death by his paternal grandparents: Bill and Betty Lanhart, maternal grandparents: Charles and Kathryn Christian. Dustin graduated from Jackson High School in 1995. He was active in soccer, track and cross country. His love of running led him to complete 5 marathons. Dustin loved life outdoors, he was an avid hunter, fisherman, tracker and observer of nature in general. He loved sharing his knowledge with others, especially the younger generations. He was happiest in the woods and fishing with his 2 best friends, his dad and his son. Dustin has been described as a fishing buddy, hunting companion, construction partner, running pal, a defender of the family, especially his children and sister Holly, co-conspirator, tormentor, especially his sister-in-law Jessica, great friend and a supporter of his fiancee Jessica and children. He had a special relationship with Keira and Rachel. Lastly, he had a special way to make anyone smile and was THE family comedian. He will be greatly missed and loved forever. Funeral services will be held at 1:00PM Saturday, November 27, 2021 at the Mayhew-Brown Funeral Home with Pastor Randy Patterson officiating. Family will receive friends 2-8PM Friday, November 26, 2021 at the funeral home. In Lieu of flowers. Memorial donations in Dustin's name can be made to: PKD Foundation at: support.pkdcure.org, the Leukemia and Lymphoma Society or a favorite charity of your choice. Funeral arrangements are under the direction of the Mayhew-Brown Funeral Home. Condolences may be sent to the family at: www.mayhew-brownfuneralhome.com

The family of Dustin W. "Dusty" Lanhart created this Life Tributes page to make it easy to share your memories.

Send flowers to the Lanhart family.