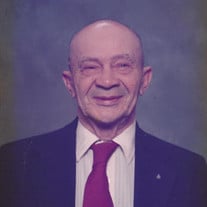 Douglas Wayne "Pete" Cosby, age 100, of Ray, Ohio, passed away Monday, Dec. 21, 2020 at Holzer Medical Center-Jackson. He was born Jan. 31, 1920 in Jackson County, Ohio to the late William Britt and Nannie Cosby. He attended school at the Old Cosby Schoolhouse on Sour Run Road, Jackson, Ohio. Douglas Cosby entered the U.S. Army in August of 1942 through the Huntington, WV recruiting station. He attended basic training at Fort Dix and his military occupation was a truck driver. During his enlistment, he was in France, Africa, Italy and Sicily, to name a few. Cosby was a World War II Veteran who received his Honorable Discharge in November 1945. He returned to Jackson and worked for the N&W Railroad of Chillicothe for over 30 years before retiring. He was united in marriage to Hester Lucille Simmons on March 19, 1949; they had 69 years together before her passing. To this union, three sons were born. He was a member of United Community Baptist Church, Limerick Road, Chillicothe, Ohio (Jackson Co.) where he was a former Deacon and in previous years, held the positions of Sunday School Teacher and Superintendent. Douglas is survived by his three sons; Roger (Martha) Cosby, Ronald "Rusty" (Maria) Cosby and Roland "Bo" (Monalee) Cosby; four grandchildren: Robert (Katessa) Cosby, Jaclyn (Lance) Causey, Melanie (Cardell) Chambers and Jalyn Cosby; and six great-grandchildren: Anitra, Alana and Brianna Causey, Kalis and Isaiah Cosby, and Shai Chambers. He is also survived by one brother: Darold (Maxine) Cosby and a host of nieces and nephews too numerous to list. He was preceded in death by his parents, wife, and six brothers: Stanley, Coston, John, Darwin, Heber and William Cosby, Jr.; and five sisters: Mary Valentine, Flossie Valentine, Wilma Brown, Sarah Powell and Wylodine Powell; and one grandchild, Miranda Danielle Cosby. Pete Cosby always gave thanks for the gift of life and the opportunity to celebrate every day because he was grateful for the things that were really important to him: God, family, faith, hope and love. Due to COVID concerns, the family regrets there will be no public visitation; a private service at the family’s convenience only. Arrangements are under the care of Mayhew-Brown Funeral Home, Jackson. Condolences may be sent to the family at: www.mayhew-brownfuneralhome.com

The family of Douglas Wayne "Pete" Cosby created this Life Tributes page to make it easy to share your memories.

Send flowers to the Cosby family.