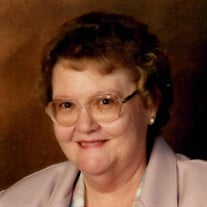 Doris J. (Claar) Rayburn, age 83, of Jackson, passed away peacefully at her home on Thursday, July 15th, 2021. The daughter of Clifford and Martha (Eisnaugle) Claar, she was born on November 23rd, 1937 in Jackson, Ohio where she resided for her entire life. Doris graduated from Jackson High school in 1955. During High School she worked at Stiffler’s Department Store. After graduation she started working for General Telephone and was the Secretary for the Plant Manager. After leaving there she started working for the Jackson Child Development Center where she rose to the position of Assistant Director. She loved her children that she took care of there with all of her heart! In 1962, she married Norman G. Rayburn of Jackson on August 4th, 1962 and remained married to him until his passing in 2018. She is survived by her son, David (Dawn) Rayburn of Jackson, sister, Sue Ann Claar of Jackson, beloved nephew Jonathon (Rebekah) Rayburn of Harper’s Ferry, West Virginia, special cousin Linda (Brown)(Jim) Anzelmo of Chillicothe, grandchildren, Brittany (Chris) Linton of Jackson, Greg (Gina) Rayburn of MacArthur, Patricia (Micheal) Noss of Colorado Springs, Colorado, Candi (Calvin) Fettig of Minot, North Dakota, Donita (Maverick) Mariner of Kenmare, North Dakota, Lance (Colette) Cotton of Kenmare, North Dakota. Also 17 great grandchildren and many other nieces and nephews. She was proceeded in death by her parents Clifford and Martha, husband, Norman, son, Charles, sister and brother in law Mary Lou and Jay D. Greer, brother in laws Homer Lee Rayburn and Paul Rayburn. A graveside service will be held on the 24th of July, 2021 at 11:00 am officiated by Pastor Wendall Vermillion at Hanna Cemetery located on Cove Road in Jackson. In lieu of flowers, please consider a memorial contribution in her name to the Child Development Center of Jackson County located at 692 Pattonsville Rd, Jackson, OH 45640 Ph: 740-286-3995. Our family wishes to express heartfelt thanks to the staff of Holzer Hospice for the care given to my mother, especially by Brianna, Margie, Shelly and Kayla. Condolences may be sent to the family at: www.mayhew-brownfuneralhome.com Arrangements are by the Mayhew-Brown Funeral Home in Jackson.

Doris J. (Claar) Rayburn, age 83, of Jackson, passed away peacefully at her home on Thursday, July 15th, 2021. The daughter of Clifford and Martha (Eisnaugle) Claar, she was born on November 23rd, 1937 in Jackson, Ohio where she resided for... View Obituary & Service Information

The family of Doris Rayburn created this Life Tributes page to make it easy to share your memories.

Send flowers to the Rayburn family.