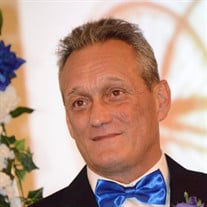 David Carl Samples, age 53, of Jackson, Ohio formerly of Vine Grove, Kentucky passed away at The Ohio State University Wexner Medical Center in Columbus, Ohio on Sunday, October 14, 2018. He was born on February, 2 1965 in Newport News, Virginia to Hollie “Sam” Samples and Suzan (Carper) Samples. David was preceded in death by his grandparents: Innie Samples and Carl and Amma Carper; his mother-in-law, Norma Barlow and his niece, Amanda Ford. He was a happy, go lucky guy who didn't have an enemy in the world and didn't know a stranger. He worked for the Waterloo Coal Company as a truck driver. David enjoyed driving trucks and working with heavy equipment. He and Missie dated back in 1988 for one year and were reunited after 25 years in the year 2014. David is survived by his parents; his wife, Melissa “Missie” J. (Barlow) Samples; his daughter, Tara (Clay) Ellis of Elizabethtown, Kentucky; sisters: Elaine (Jerry) Jones of Vine Grove, Kentucky, Christy (Ken) Boeglen of Radcliff, Kentucky, Julie (Chris) Ford of Radcliff, Kentucky and Rebekah (Ricky) Thompson of Vine Grove, Kentucky; his precious grandchildren: Keaton, Ava and Kyle Ellis; father-in-law, Paul Barlow; brother-in-law's: Todd (Melissa) Barlow of Jackson, Ohio, Randy (Jennifer) Barlow of Ashland, Ohio and Bobby Sanders of Radcliff, Kentucky; several nieces and nephews and a host of special friends and neighbors. A funeral service will be held on Sunday, October 21, 2018 at the Mayhew-Brown Funeral Home in Jackson at 1:00 p.m. with Chaplain Randy Barlow and Pastor Todd Barlow officiating. Burial to follow at Fairmount Cemetery in Jackson, Ohio. Family will receive friends from 10:00 a.m.-1:00 p.m. prior to the service. Arrangements are under the direction of the Mayhew-Brown Funeral Home in Jackson. Condolences may be sent to: www.mayhew-brownfuneralhome.com.

The family of David Carl Samples created this Life Tributes page to make it easy to share your memories.

Send flowers to the Samples family.