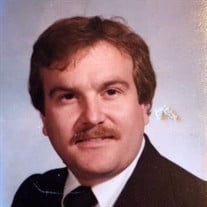 David Kim “Puffy” Jones, age 65, a lifelong resident of Jackson, Ohio, and longtime owner/operator of Lewis Drug Store, Jackson, Ohio, passed away Friday, March 15, 2019 at Riverside Methodist Hospital, in Columbus, Ohio. He was born in Columbus, Ohio, on May 6, 1953, to the late Dwight and Mary Elizabeth (Kimbel) Jones. Kim graduated with honors as Class Valedictorian from Jackson High School in 1971. He continued his education at Miami University of Oxford, Ohio, graduating in 1975 with a BS in Business/Finance. In 1983 he graduated with a degree in Pharmacy from The Ohio State University. Following in the footsteps of his grandfather, Morgan Jones, and his father, Dwight Jones, he returned to Jackson to become the 3rd generation pharmacist at Lewis Drug Store. As his grandfather, and father before him, Kim displayed the same work ethic- hard work, dedication and steadfast service to the community- working at the pharmacy until the day before his passing. Kim was a member of the First Presbyterian Church of Jackson and a proud 44 year member of the Local Chapter #466 BPOE. He was a lifetime member/contributor of the Miami University Alumni Association, The Ohio State Alumni Association and The Ohio State University College of Pharmacy and honored his Welsh-American heritage by being a lifetime member/contributor of the Welsh-American Heritage Museum in Oak Hill, Ohio. He was an avid supporter of the youth of the community through academics, athletics and the county 4-H Program. He is survived by brothers, Morgan (Sharon) Jones of Cincinnati, Ohio and Brent Jones of Jackson, Ohio; a sister, Bronwyn Jones, of Jackson, Ohio and Uncle Bill Kimbel of Wellston, Ohio. Also surviving, many cousins, nieces, nephews that were very dear to him, as well as many lifelong friends. In lieu of flowers, the family requests memorial donations be made to: Jackson City Schools, Attn: Dawn Taylor, c/o The Dwight W. Jones Family Memorial Scholarship, 450 Vaughn St., Jackson, Ohio 45640. Funeral Services will be held privately. There will be a public “Celebration of Life” held at the Jackson Elks Lodge, Fidelity Hall, 316 Main St., Jackson, Ohio 45640 on Saturday, March 23rd from 12:30 p.m.-3:30 p.m. Arrangements are under the direction of the Mayhew-Brown Funeral Home in Jackson. Condolences may be sent to: www.mayhew-brownfuneralhome.com.

The family of David Kim Jones created this Life Tributes page to make it easy to share your memories.

Send flowers to the Jones family.