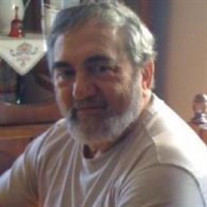 Loving husband, father and grandfather Clinton ‘Clint’ Wilbur Wolford passed away peacefully surrounded by family on Saturday, November 27th 2021 at the V.A. Medical Center in Chillicothe, Ohio, he was 81 years old. Born May 6th 1940 the first son of Ira Bryant and Lexie Skeens Wolford in Williamson, West Virginia. He spent most of his childhood at home in Phelps, Kentucky. Clint was a graduate of Jackson High School, Class of 1958. Shortly after graduation he joined the United States Navy and honorably served as an aviation electronics technician for over 20 years, retiring as a Chief Petty Officer and proud veteran. This naval career took him to destinations near and far, including Trenton, New Jersey where he married Elizabeth Ann DeBlois on May 6, 1961. Clint and Ann were happily married for over 60 years and the parents of six daughters. After retiring from the Navy, Clint worked an additional twenty years as an electronic mechanic at the Portsmouth Gaseous Diffusion Plant in Piketon, Ohio, finally retiring in 1999 to travel and adventure. After retirement he and his wife Ann traveled extensively throughout the United States and Europe, which had always been their dream. Preceded in death by his parents Bryant and Lexie Wolford, brother Robert G. Wolford, Sister Donna M. Morris and nephew Kevin Wolford. Many family and friends will miss him very much including his beloved wife Elizabeth ‘Ann’ Wolford, his daughters Bonnie Holman (Tom Records) of Erlanger, Kentucky; Julie (Chris) Watkins of Jackson; Susan (Mike) Stevens of Lebanon, Ohio; Cheri (Chuck) Anders of Jackson; Valerie Murphree of Independence, Kentucky; and Becky Wolford of Jackson. His brothers Bryant (Sally) Wolford, Ted (Cathy) Wolford, Eddie (Patty) Wolford, Denver (Janet) Wolford all of Jackson; and sister Linda (John) Baisden of Chillicothe, Ohio. Grandchildren, Kristi Gordon (Travis Lynch), Jeffery Holman, David (Hope) Holman, Cavin DeJordy, Holly Sheets, Matthew Stevens (Ali Stigler), Katie (Brennan) Kallmyer, Trey (Nicole) Anders, Tyler (Caitlin) Anders, Shannon Murphree, Taylor Murphree, Nicole (Brandon) Mason, Curtis (Heidi) Watkins, James Watkins, and many great-grandchildren. The family would like to extend our special thanks and gratitude to the nurses and staff of the Chillicothe V.A. Medical Center for the wonderful care and attention which was given to our father during his lengthy illness, especially during the pandemic when family were not allowed to visit. Funeral arrangements under the direction of the Mayhew-Brown Funeral Home of Jackson, Ohio. A celebration of Clint’s life will be held at the convenience of the family.

The family of Clinton Wilbur Wolford created this Life Tributes page to make it easy to share your memories.

Send flowers to the Wolford family.