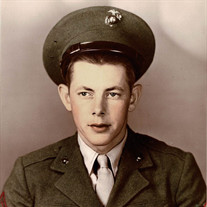 Charles Harold “Bud” Martin, born September 13, 1931, passed peacefully at his home on July 4, 2018. Bud was born in Pike County, Ohio. He lived on a small farm with his parents Charles Harold Martin, Anna Marie Schuster Martin and siblings Marie (Bill) Tomblin, Ruby (Mac) McIver, Darlene (Hugh) Davis, Donna (Jerry) Brown, and Jacob Martin. Growing up during The Great Depression helped him develop colorful stories and an outstanding work ethic. At a young age of 8 he would cut crops and hay to help earn a wage. He hunted and farmed rabbits to help feed the large family. As an adult, he retired from the Good Year Atomic Plant after 42 years. He also drove a school bus for Oak Hill School System. Later, he retired from the GJMV Solid Waste District in Wellston, Ohio. Bud attended a one room elementary school in Piketon. He often laughed about the time he was paddled, he bit the teacher on the leg, the teacher yelled, and Bud ran home. Bud graduated from Piketon High School in 1949. After graduating, he enlisted in the United States Marines. He served as a mechanic in the Korean War. After returning from the service, Bud met and married Virginia Lou “Jenny” Hall of Jackson, Ohio in 1955. They met when he found her cousin’s purse at the movie theater and came to her home to return it. They had 3 children, Jay (Pam) Martin, Jill (Mike) Massie, and Jeff Martin. Bud and Jenny were active as 4-H advisors for the Bobs and Bobbettes 4-H club. They were also members of the Victory Grange. You could see Bud yearly stirring apple butter at the Apple Butter Tent during the Jackson County Apple Festival. Bud served as treasurer for the Jackson County Democratic Party. He has a strong sense of duty and service to his friends, family, and community. Bud was a member of the Winchester Community Church. He enjoyed praying and laughing with his church family. He was a kind, generous, and loving friend, father, and grandfather. His 9 grandchildren, Alex (Erron) Brennen, Kaitlyn Massie, Ryan Massie, Sean Massie, Jessica (Tyler) Swackhammer, Jennilyn (Phillip) Osborne, Kelsey Martin, Sarah (Wes) Hardin, and Steven Martin called him “Poppy”. He was the go to guy for outside activities such as walks in the woods, picking raspberries, catching snakes, hunting, skinning squirrels, and watching birds. He even once flipped a shark out of the water with his hands at the beach. He knew no fear. There was no one like “Poppy”. Poppy Bud was graced with 10 great grandchildren, Jordan, Jayden, and Jax Swackhammer, Spencer, Parker, and Riggs Osborne, Bo Hardin, Mykenna Eberts, Cadynce and Piper Brennen. Bud was a hard worker but he loved to laugh and make others laugh. He was a joyful spirit that treasured simple pleasures like time with family, being in the woods, having a bonfire, growing a garden, and getting a smile from the most serious of faces. When Bud’s wife Jenny passed on August 10, 2007, he struggled to maintain his joy without his life partner. He missed Jenny every day, but continued on his path with the loving support of his friends and family. His friends and family will miss his ornery personality and sense of humor, but we find peace in knowing he lived his 86 years well, passed at home peacefully, as he had wished, and now rests in the loving arms of his wife. As he would often say, “Beefsteaks when I’m hungry. Corn liquor when I’m dry. Greenbacks when I’m broke, and Sweet Heaven when I die!” May he rest in peace until we meet again. A funeral service will be held at the Mayhew-Brown Funeral Home on Monday, July 9, 2018 at 2:00 p.m. Calling hours will begin on Monday at 12:00 p.m. up until the time of the service. Burial to follow at Fairmount Cemetery. Arrangements are under the direction of the Mayhew-Brown Funeral Home in Jackson. Condolences may be sent to: www.mayhew-brownfuneralhome.com.

The family of Charles Harold Bud Martin created this Life Tributes page to make it easy to share your memories.

Send flowers to the Martin family.