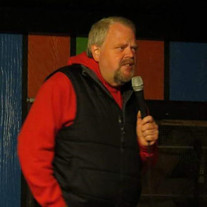 Charles “Chuck” R. Garthee, age 51 of Jackson, passed away unexpectedly on Friday, November 1, 2019. He was born in Valparaiso, Indiana, on December 20, 1967, to Gloria G. Norris, who survives. He was preceded in death by his wife, Mary (Heath) Garthee, an infant son, Mason B. Garthee, a brother, Merrill W. Garthee, and his father. Chuck graduated from Jackson High School and worked in the wastewater treatment plant at the Chillicothe Correctional Institution. Outside of work, he was an avid fan of the Ohio State Buckeyes and a stand-up comedian involved in the local comedy scene. Besides his mother, he is survived by his son, Zane A. Garthee, a sister, Tammy L. Garthee, a brother, Richard J. Garthee, and his fiance, Diana Smith. Several nieces, nephews, and cousins also survive him. Services were held at the Mayhem-Brown Funeral Home on Tuesday, November 5. Arrangements are by the Mayhew-Brown Funeral Home in Jackson. Condolences may be sent to the family at: www.mayhew-brownfuneralhome.com

The family of Charles "Chuck" R. Garthee created this Life Tributes page to make it easy to share your memories.

Send flowers to the Garthee family.