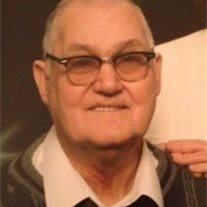 Mayhew-Brown Funeral Home 135 Broadway Street Jackson, Ohio Carl E. Wyatt of Daisy Avenue, Jackson, Ohio age 87 years, 5 months and 2 days passed away peacefully at his home Thursday, February 6, 2014. His passing was so peaceful and gentle releasing him of his pain he had endured. The Lord granted his wish by letting him die at home with his family to comfort him. He was born September 4, 1926 in Jackson County, Ohio to the late William and Nellie Ray Wyatt. He was the oldest member of the Petrea Freewill Baptist, which he attended until his health problems kept him from attending. During his time of attendance, he served as Sunday school Superintendent, trustee, Song Leader and Adult Sunday school Teacher. He worked at Montgomery Trucking Co. in Wellston for several years, retiring in 1988. He served 3 years in the U.S. Army from 1950-1953 and received 5 Bronze Campaign Stars for the valuable work he did in laying communication wire while in Combat Zone. He is survived by his wife of 54 years Jackie Sharp Wyatt who was his caregiver up to the time of his death, daughters: Christina (Jerry) Boggess and Sarah Wyatt, sons: Michael (Gladys) Wyatt, Keith (Jo Ellen) Wyatt and Charles Wyatt, brothers: Jim (Betty) and Dwayne (Carolyn) Wyatt, several grandchildren and great grandchildren. He is preceded in death by his parents, brothers: Willard Robert Wyatt, William Jr. Wyatt, David Wyatt, Donald Wyatt and Kenneth Wyatt Sr., sisters: Bernadene Wyatt and Juanita Bussey, sisters-in-law, Maternal grandparents and paternal grandparents. Funeral services will be held at 2:00 P.M. Sunday, February 9, 2014 at the Mayhew-Brown Funeral Home with Rev. Wayne Searls officiating and burial to follow in the Fairmount Cemetery. Friends may call from 2-8P.M. Saturday, February 8, 2014 at the funeral home. Special thanks to Carl's three special Angels who assisted in the time of need: Thanks to the Sheriffs Dept., EMS Squad and the people of the Mayhew-Brown Funeral Home and for all the doctors and nurses that helped Carl have a Quality of life. All the kindness will not be forgotten. Condolences can be emailed to www.mayhewbrownfuneralhome.com

The family of Carl E. Wyatt created this Life Tributes page to make it easy to share your memories.

Send flowers to the Wyatt family.