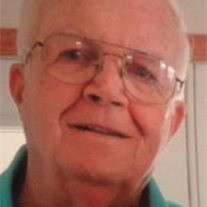 Heaven's gates opened on February 10, 2014 and welcomed Calvin Eugene "Gene" Shook into the loving arms of his Lord and Savior Jesus Christ. Gene was born on June 11, 1938 to Carl Ray and Anna Mae Deck Shook. He was raised on Garfield Road in Coalton, Ohio, along with his brothers, Carl, Tom, Fred, Jim and his sister Marilyn. Gene was a member of the Coalton High School graduating class of 1956. Shortly after graduation, Gene was employed by the Frick Gallagher Company in Wellston, Ohio. He worked in the shipping and receiving department and was an employee of the company for twenty-five years. In 1960, he met Lillian Marie Rose of Jackson, Ohio. They dated for the next three years until they were joined in holy matrimony on July 6, 1963. Their union was such a unique and loving bond; always worrying about the other before their own needs. A perfect example of true love and lifelong friendship. Gene and Lillian decided to make their home in Jackson. They were blessed with three children: Tim, Teena and Terri Renee. Gene was also a wonderful Pap-pa to his five grandchildren: Jennie Lynn, Trevor, Steffi, Taryn and Emily. Gene was employed in 1976 at the Goodyear Atomic Plant in Piketon where he worked in the shipping and receiving department until his retirement in 2001. Gene had been exposed to hazardous chemicals while working at the Atomic Plant. He had battled Pulmonary Fibrosis since 2012. He was also a 13 year cancer survivor. The awful disease however crept upon Gene once again on December 10, 2013 and eventually took his life exactly two months to the day he was first diagnosed. Gene was a quite man. He loved the simple things in life, like spending time with Lillian and especially the grandkids. He loved watching the Reds, listening to country music and watching westerns. He had previously coached little league baseball and was an avid supporter in whatever activity his children and grandchildren were involved in. Most of all, he did everything possible to show Lillian everyday how much she meant to him. Gene was preceded in death by his parents; brothers, Carl, Tom and Fred Shook; sister Marilyn Drake; father-in-law Doyle Rose and his beloved cat, Miss Kitty. He is survived by his wife of 50 ½ years Lillian; children: Tim (Mary Catherine) Shook, Teena (Dave) Adkins and Terri Renee (Michael) McMurray; grandchildren: Jennie Lynn and Steffi Shook, Trevor and Taryn Strawser and Emily Adkins; his mother-in-law Adlee Rose; brother Jim (Carolyn) Shook; several special nieces and nephews also survive. Gene was a man who loved the Lord and gave his life to Him 14 years ago. He was ready to go home to live all eternity with Jesus. According to his wishes, Gene will be cremated with no viewing or funeral services. Interment will be in the Fairmount Cemetery at the convenience of the family. Condolences on line to www.mayhewbrownfuneralhome.com

Heaven's gates opened on February 10, 2014 and welcomed Calvin Eugene "Gene" Shook into the loving arms of his Lord and Savior Jesus Christ. Gene was born on June 11, 1938 to Carl Ray and Anna Mae Deck Shook. He was raised on Garfield Road in... View Obituary & Service Information

The family of Calvin Eugene "Gene" Shook created this Life Tributes page to make it easy to share your memories.