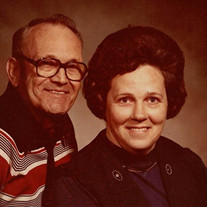 Betty Jane Terry, 87, formerly of Jackson, passed from her earthly life into her eternal life, reuniting with her beloved family who passed before her on August 17 at 12:37 p.m. in Heartland of Chillicothe. Betty was born September 22, 1931, the youngest of 9 children, to Pearl and Bessie (Tomlinson) Cash. She was united in marriage to the love of her life, Gerald Terry, on November 4, 1950. Together they were blessed with two children, Geraldine and Douglas. Betty was a joy to know, hardly ever meeting a stranger. Alongside her husband she ran Terry’s Grocery for a time, all while being a loving wife and mother. Betty had worked as a Jackson township clerk for several years and also worked at the Jackson Plastic Plant then transitioned into her most loved role, being a grandma. She was a long-time fan of the soap opera, Days of Our Lives. She loved to cook and bake pies, becoming well known in Jackson for her apple ones. Betty attended Savageville Church and enjoyed helping with functions there. She loved to care for and watch hummingbirds. Betty outlived her parents, brothers and sisters. She lost a second grandchild, Douglas Robert Terry in 1982. After 54 years of marriage, she lost her husband, Gerald in 2005. Betty became victim to dementia in 2014 which shielded her from the pain of losing both of her children in 2016. Betty is survived by her daughter-in-law, Dianna Terry of Chillicothe, son-in-law, John Hughes of Jackson, granddaughter, Dreama (Kevin) Rooney, grandson, Gerald “Dougie” Terry, both of Chillicothe, great grandchildren, Kayelyn, Britton and Kirstanee Rooney, all of Chillicothe, a special niece, Bonnie Dozer of Hamden and a special granddaughter, Regina Harper and her mother, Doris, of Jackson. Betty’s family would like to say thank you to the staff and volunteers of Heartland Nursing Home and Hospice for loving and caring for her when they couldn’t. In lieu of flowers the family requests donations be made to the Jackson County Heart Support Group, 215 Broad Street, Jackson, Ohio 45640. A funeral service will be held at the Mayhew-Brown Funeral Home on Friday, August 23rd, 2019 at 11AM with Minister Bill Rickman officiating. Burial to follow at Little Mound Cemetery in Richmond Dale. Family will receive friends at the funeral home on Thursday August 22nd from 4-8PM. Arrangements are under the direction of the Mayhew-Brown Funeral Home in Jackson. Condolences may be sent to: www.mayhew-brownfuneralhome.com

Betty Jane Terry, 87, formerly of Jackson, passed from her earthly life into her eternal life, reuniting with her beloved family who passed before her on August 17 at 12:37 p.m. in Heartland of Chillicothe. Betty was born September 22, 1931,... View Obituary & Service Information

The family of Betty Jane Terry created this Life Tributes page to make it easy to share your memories.

Betty Jane Terry, 87, formerly of Jackson, passed from her earthly...

Send flowers to the Terry family.