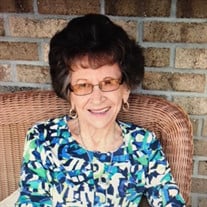 Ardith Ann Rollins, 94, of Jackson, Ohio passed away at Four Winds Community on Sunday, March 31st, 2019. Ardith was born in rural Vinton County, on August 8th, 1924, to the late Forrest White Davis and Donald Burdette Davis, and was preceded in death by her sister, Dorothy Davis Sayer. She was married to the late Elmo Percy Rollins on December 9, 1942. The couple were together for 55 years, and had two children, both living: Patty Ann Rollins Davis, and Don Rollins. Ardith was a true lover of people, and never met a stranger. She and Elmo enjoyed dancing, playing cards, riding motorcycles and bowling. She bowled well into her eighties, and worked as a school librarian and secretary for 30 years. Ardith was active in Eastern Star, and attended Trinity Wesleyan Church, Oak Hill, for many years. Above all, Ardith’s first love was family. In addition to her children, she is survived by grandchildren, Deidra Davis Cruse (Gary) and George Davis II (Lisa); great grandchildren: Tyler Sparks, Nickolas Sparks, Marlee Sparks, Kersten Davis, Kendell Davis, Kaley Potter, Ashley (Jeffrey) Webb and Trace Davis; and her great-great grandchildren: Jace Sparks, Riley Jo Sparks and Gunnar Sparks. Also surviving are two sister-in-laws, Charlene Bowers and Greta Camick. Visitation will be at the Mayhew Brown Funeral Home in Jackson, on Friday April 5th, 11 AM-2 PM, followed by the funeral service at 2 PM at the funeral home. Rev. Herman Stewart will officiate. Burial to follow in Salem Cemetery, Wellston. In lieu of flowers, donations in Ardith’s name may be made to: The Growing Oaks Program, Oaks United, P.O. Box 152, Oak Hill, Ohio 45656. Arrangements are under the direction of the Mayhew-Brown Funeral Home in Jackson. Condolences may be sent to: www.mayhew-brownfuneralhome.com

The family of Ardith A. Rollins created this Life Tributes page to make it easy to share your memories.

Ardith Ann Rollins, 94, of Jackson, Ohio passed away at Four...

Send flowers to the Rollins family.