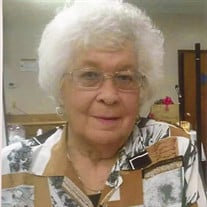 With blessed assurance Adlee Mayse Rose walked into the loving arms of her Savior, Jesus Christ on the night of August 26, 2018. Adlee was born on November 10, 1925 to Benjamin and Mary Chandler Mayse. She was raised in Ashton, West Virginia along with her siblings: Dockie, Jock, Virgie, and Brownie. Living in the backwoods of West Virginia, Adlee was no stranger to dirt floors, being poor, and working hard. She lost her mother at the age of three. Since her father did not remarry until later in life, Adlee and her sisters attended to all the household responsibilities. For this reason, Adlee quit school after the eighth grade. Being no stranger to hard work, Adlee had many jobs throughout her lifetime. The two she will be remembered for is her job working at the Marathon Inn and as being the restaurant manager at G.C. Murphy's until her retirement in 1989. Adlee never met a stranger. She made so many strong and lasting friendships throughout her career. At times, customers would stop by just to see her instead of being served a meal. Adlee met the love of her life, Doyle Rose, at the age of sixteen. They were happily married until his passing in 1997. Adlee and Doyle shared a fun and loving union. They both loved to go fishing and camping, and were known for their wonderful Christmas Eve celebrations where everyone was welcome. Doyle and Adlee would always hold hands while walking together. Now they are reunited, and holding hands while walking the golden streets of Heaven. Adlee and Doyle's union was blessed by their only child, Lillian Marie. They loved Lillian, but she was never raised to have everything given to her. This was shown by her undying devotion to them both. Shortly after Doyle's passing, Adlee moved into Lillian and son-in-law, Gene's home. Lillian has devoted her life to taking care of her mother, especially during the last three years of Adlee's life. Adlee was a wonderful grandmother to Tim, Teena and Terri Renee. Unlike how Adlee and Doyle raised Lillian not to be spoiled, they spoiled the grandkids. They always provided all the “extras” and never went a day without visiting them. Adlee thought the grandkids were wonderful, but she marveled over her great-grandkids: Jennie Lynn, Trevor, Steffi, Taryn, and Emily. She was always so proud of all of them and told everyone of their accomplishments. Adlee always looked so much younger than her age. She would take such great pride in the fact people thought she was the kids' grandma instead of their great-grandma when they were on an outing with her. Adlee had an extra special relationship with her great-granddaughter, Taryn, who has always lived in the home with her and Lillian. Adlee and Taryn were two of a kind. Taryn kept her Ma young and Ma gave Taryn her feistiness. Adlee was a strong Christian woman who was a devoted member of the Jackson First Church of the Nazarene. While attending there, she filled many roles such as being a greeter, bible school worker, and kitchen helper, just to name a few. When Adlee could not physically attend church herself, she attended with Lillian at her church. Adlee loved gospel music and listened to it constantly. Adlee was proceeded in death by her parents; her step-mother: Sarah Seth Mayse; husband: Doyle; son-in-law: Gene Shook; sisters: Sissy Marie (Dockie) Barnett and Virgie McClaskey; brothers: Charles Henry (Jock) Mayse, Mattie Brown (Brownie) Mayse and infant brother Kenneth Mayse; step-sister: Edith Seth Steele; step-brothers: Stanley (Steamer) Seth and Floyd Seth; sister-in-law: Dorothy Rose Delawder and brothers-in-law: Hyman Barnett, Bill McClaskey and Earl Steele. Adlee is survived by daughter: Lillian Shook; grandchildren: Tim (Mary Catherine) Shook, Teena (Dave) Adkins, and Terri Renee (Michael) McMurray; great-grandchildren: Jennie Lynn and Steffi Shook, Trevor and Taryn Strawser and Emily Adkins; sisters-in-law: Pauline (Tootie) Mayse and Dorothy Mayse; special friend: Elmer Hill; several special nieces and nephews also survive. Adlee will always be remembered for her feisty, spunky disposition, her generosity to others, her delicious cooking, her bowling skills, contagious laugh, her love of hot pink nail polish, and the colors red and black. She was ready to go home to live all eternity with Jesus. According to her wishes, Adlee will be cremated with no viewing or funeral services. Interment will be in the Fairmount Cemetery at the convenience of the family. Condolences on line to www.mayhew-brownfuneralhome.com.

With blessed assurance Adlee Mayse Rose walked into the loving arms of her Savior, Jesus Christ on the night of August 26, 2018. Adlee was born on November 10, 1925 to Benjamin and Mary Chandler Mayse. She was raised in Ashton, West Virginia... View Obituary & Service Information

The family of Adlee Mayse Rose created this Life Tributes page to make it easy to share your memories.

With blessed assurance Adlee Mayse Rose walked into the loving...